It has been a heck of a ride for the last 7 months. I had such good intentions of doing this blog through this journey to share what we are going through so others may take some comfort from it.

The one thing I learned fast is cancer turns your life every which way but loose! And the road to Hell is paved with good intentions.

I just now read the comments from the previous post. And belated I thank all who commented. I can tell you all that some days just getting through the day takes all I can give. And emotions can come to call at the oddest times.


I am giving strong consideration to getting back to blogging. I have taken to facebook as it is a quick way to keep family and friends on board with our situation. I go days sometimes without even turning on the laptop. Phone calls are limited mostly to family. I have gone out on my own to do something other than marketing only three times since we began this journey. There is a measure of safety and comfort spending my days here at our "42 Acres of Paradise" with Geoffrey and the critters. I am not able nor ready to change that.

We are at the "breath holding" phase now. On the 25th we will meet with the Dr. to determine if the original diagnosis was correct. And then if it was is the CLL now in remission and where do we go from here. If it isn't and he has what is called Mantel Cell Leukemia what that will mean. I have read the press on that one and it is cause for concern.

So once again I ask patience. I hope to get more serious about this blog again as I said. Prayers for you and yours. Check back again and we will see how my new blog pledge is going. Or friend me on FB and keep us with us from there.

This is life folks. My husband Geoffrey is in Mercy Hospital in Redding with the above. It is a sneaky bugger, slow growing, by now more then a decade but who knew?

We eat well home grown, organic for the most part. We work hard with a herd of LaMancha dairy goats, chickens and such. But when my husband was young in New Jersey and each week the truck went through the neighborhood spraying a fog of DDT the parents encouraged the children to go "play" in the fog. It was the fifties who knew?

So maybe the take home from this is if it kills anything then it isn't good for anyone? I will try to keep blogging but some days between the farm and daily visits to the hospital it is hard to even keep eating.

This sharing isn't about "poor me, or poor us" it is sharing. Get up breath, one foot in front of the other and make it through the day. We are all human, all of us put our jeans on in the same fashion. Isn't it about time to take into consideration that we are all the same, down in the core?

Have a blessed evening with the ones you love!

A bit of love for you all. 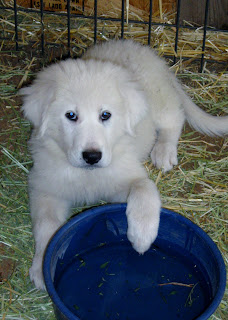 Trip made. Critters exchanged. Camera in truck. Pix and commentary later. Time for bed. Mark this space!
Posted by goatldi at 10:49 PM No comments: 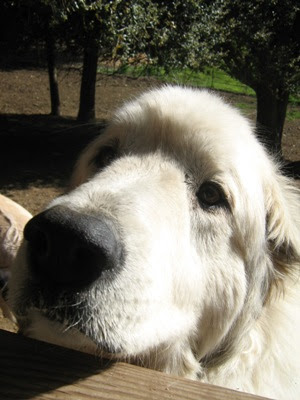 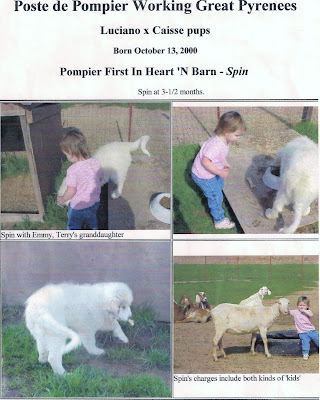 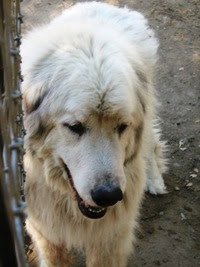 We knew when we bought 42 acres for our farm we would need more help on the livestock guardian front. Spinner is almost 12 and not in good shape, in fact we don't expect her to make it through the summer. 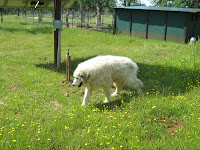 So I began a search for a puppy. It was beginning to look rather hopeless. No one had a litter yet or they were crosses not 100% Pyrenees. Not to be confused with being registered. We just wanted a dog that was all Pyr. After having four of our own and fostering or transporting close to 100 we are head over heals with the breed.

Finally the breeders who sold us Spinner as a pup had a male to offer. Evidently the first offer had to back out due to family issues.

Enter Pompier Magical Mystery Tour aka Sherman. He was then old enough to leave Mom but we had a few things in our way fencing and barns still to finish.Then it rained and rained we got woefully behind. Finally the end of January things were a go and plans were made for me to travel to White Dog Ranch in Potter Valley http://www.whitedogranch.com/  That was to be early February. But the trip was not to be I fractured my patella (knee cap) three days before the trip. So the four month old puppy waited some more, sigh.

Finally in early May I got the go ahead from my Dr. and I made the three hour trip to the ranch bringing home Sherman. 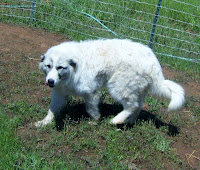 He bears a resemblance to Spinner when she was a pup. But he is his own dog. He is a bit of a rascal I attribute  that to the "boy' parts.
And did I mention ? He climbs. Despite our best efforts Sherman defeats us and climbs over just about everything.So for now we have tossed in the towel.

Every afternoon about 1 - 2 p.m. he climbs out of the yearling pasture and cruises. He visits Geoffrey in the garage and then does a drive by Spinner.

She has always been an alpha bitch but now with her physical issues she tolerates no nonsense and our young "bucket head" gets his face "eaten" and he then goes over to lie down with the senior does who go out foraging daily.

Part of our plan in getting this daily escape to come to a halt is giving him a partner. In a week to two weeks I will pick up a 3 month old female from a friend in Oregon. We have high hopes supplying him with a buddy will be helpful in curbing his daily climb overs. Spinner was very happy for about 6 years with her partner Kingston(below with Claire on left and Emmy on right)  until his untimely passing. Crossing all that dangles the adverse effect won't happen, he teaches her his tricks. We still have 5 strand barbed wire for perimeter fencing around all the 42 acres. Not exactly Pyr. fencing but it will be a bit before we can afford to fence the perimeter with 47" field fencing . So cross your fingers and dew claws for us that the cute young thing from the great state of Oregon turns this California boys head! 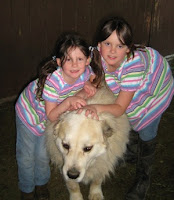 Posted by goatldi at 4:59 PM No comments:

One of the things that I have started since we got somewhat settled in is selling our eggs and goat milk soap at the Anderson Farmer's Mkt. on Thursday mornings from 7:30 am to 1 pm. I don't do a rousing business $$ wise every time but I do an amazing business otherwise. That would be the business of sharing. Sharing the whys and wherefores of sustainable living. I borrowed my status from my FB yesterday which explains a bit more.

This is my table at one of the first markets I attended. I have branched out and will get some new photos to share next week. I am a  member  of the Shasta Growers Association and plan on becoming involved in Mountain Growers Association also which will enable me to attend two other markets as we grow. 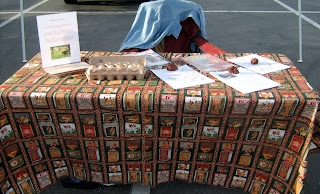 My new read "Folks , This Ain't Normal" Joel Salatin, I love the whole deal family farm, pastured pork, chicken. Humane treatment of animals who give their all to feed us. My vision is getting food of this nature to people who need it but can't afford it because of the cost. This is why , one of the whys, I am at Farmers Mkt. in Anderson every Thursday. Yes I love selling my products but more so I love sharing the vision.

And while reading Joel Salatin's book tonight this caught my eye and I could relate to it . I love farming and here is what he has to say. "What do you do out there on the farm? If you don't go to a movie, don't get takeout, don't bar hop, don't spend most evenings at soccer games-what on earth is there to do?" Oh, let me tell you. Each morning I step out into dew-speckled pastures, each drop a rainbow-studded diamond adorning orchard grass, red clover, white clover, plantain, chicory-a whole salad bar bedazzled in morning's solar glory. I have thousand of expectant animals waiting for a fresh salad bar. They love me."

We aren't close to the level of Polyface Farm. But the vision is shared. If we can make a difference in the eating habits of one family each time we attend market then the day is a blessing , a gift to us and to them.

I come from a line of farmer's my mother's people. I sincerely believe there is a farming gene in the DNA make up . I got it or it got me, no matter. But when one receives a gift sharing it with others is what makes it special.


HAPPY FOURTH OF JULY TO ALL!

I am attempting to set aside some time each week to resurrect my blog. So much has happened since the move to our 42 acres of paradise in November of last year. All of the sudden it was kidding season and my life went into overdrive dairy goat style.

So check in occasionally, some of you do already, high hopes that by end of month I will be posting on a newly designed blog if not daily at least a few times a week. Our background is a photo of our wonderful view of Mt. Lassen out our "back yard".
Posted by goatldi at 3:56 PM No comments: 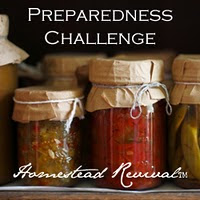 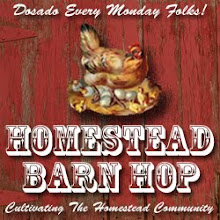